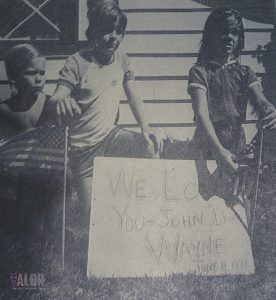 “How does it make you feel, Matthew?” These words were so very simple to understand but entirely complex in their design.

My father raced to the backyard in 1979. It was a beautiful day, full of swimming in our tepid pool. Skin bronzed from the California sun – the same sun – bleaching our hair to the blondest blonde you have ever seen. He reached us without so much as a gasp for air, steadfast in his resolve to utter the words succinctly, but with fervor. As a Marine, we had come to expect this from our Father. “Kids, the paper is here! They want to take a picture of you and your sign outside!”, he exclaimed.

We scrambled out of the pool, attempted to dry off with vigor, but to little avail. When we reached the front yard several neighbors had gathered. The local media was standing in wait, and we were going to be in the paper. We had erected a testament to John “The Duke” Wayne earlier that morning after hearing of his passing. This garnered attention from our neighbors and the Ventura County Star Free Press. Of course, the gravity of the situation was lost on me at the time. John Wayne, who?

We were forever immortalized in the chalky-ink of the morning paper. We signed autographs for our neighbors and retold the story over Sara Lee Coffee Cake… ad nauseam. It was the epitome of our young lives.

I reflected little on the meaning of it all until my father asked me the question that prefaces this article. I remember cleaning up from the rudimentary memorial with a lackluster demeanor. I pulled the wooden staked flags from the ground, and somewhat lazily tossed them in the garage. A garage that Red Fox would feel the urge to organize if his fictional character harbored the intent. I felt the hairs on my neck stand up on end, as I slowly rotated my head posterior to where it once was – I saw, no, felt my fathers’ penetrating gaze. He slowly walked over to my position, bent over slowly, and picked up the flag. He knelt by my side and told me of his service to our country, the meaning of the flag, and the intent behind its purpose. All of it spilled out of my mind as fast as it went in – I was five years old after all. But then he asked me the question that has been emblazoned in my mind since its inception. “Matthew, How does the flag make you feel?” I was dumbfounded, I didn’t understand the question, and tried my best to muster an answer that never came.

My father explained to me that the flag is to be revered, to be protected, and to be treated with the utmost dignity and respect at all times. I simply asked, “Why?”

I can’t recall every detail, but it was something close to the following account: “The flag is not an item. It isn’t a toy or a piece of furniture. It carries the hearts, souls, and blood of our people. Veterans gave their lives to defend its altruistic and lofty goals. It reflects a tireless effort in humanity and strength. It is family. It is the lessons of the past, the efforts of today, and our compass for tomorrow. You must figure out how it makes you feel because if you fail to do that, you will never understand its value and meaning.”

As I reflect on Memorial Day I find myself struggling to gleam something substantive and haphazardly write about what countless others have done over the years. As I type away, all of it had been said before. It was uninspiring and just downright regurgitated facts and supposition. Then I remembered this time in my life. The time when the sodium lights turned our streets a hideous amber color, instead of the artificial moonlit-white we were accustomed to basking in. A simpler time.

I have carried the flag as Starboard Watch Leader in Boot Camp. I have seen the flag in tatters. I have replaced it at schools, libraries, and neighbor’s homes. I surrender and retire my flag every year like clockwork. A 30-foot metal testament allows Her to wave outside of my home. My appreciation of the Colors has little to do with tradition and more to do with my personal attachment to its continued meaning. I have draped the flag over friends, and wept over its flagrant mistreatment. For me, the definition of the flag is impossible to put into words. Like love; it is indescribable for most people to convey. In my humble attempt to replicate that feeling, I hope it allows you to reflect on your own story. Share your meaning openly and proudly. Because in the end, we owe the Veterans who have made the ultimate sacrifice so very much. She deserves for all of us to reflect – just for a moment – and define how WE feel. On this day of memory, that journey is for you to uncover as an American, a citizen, and a patriot. God, bless America.